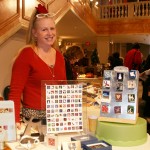 One of twenty five women that was invited to participate in the show at the National Museum for Women in the Arts, called Celebrate the Season. I went down to Washington to get more exposure for Ahlers Designs, so that all the companies that I met with down there would know that we create custom gifts and awards, for corporations and individuals. While I was there I met a couple of other women who also have WBENC certified companies, which was fun and exciting. A funny thing that happened while I was down there, a man had purchased gifts for all of his staff. The next day he returned to do some more Holiday shopping with his wife. He pointed out the gifts he had purchased and his wife turned to him and said, " That's great, but doesn't that magnet look familiar?" It turns out that she had purchased the very same clip magnet at one of our stores in the area, Appalachian Spring.

gailAhlers Designs at the National Museum for Women in the Arts12.21.2010

This site uses Akismet to reduce spam. Learn how your comment data is processed.