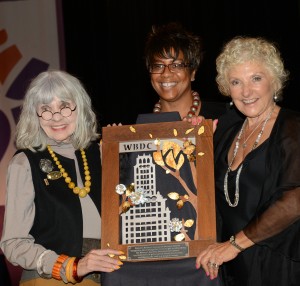 Gail Ahlers believes passionately in what she calls “the sisterhood of prosperity.”

It’s a philosophy the artist and businesswoman from Pawtucket, Rhode Island says allowed her to rethink her approach to business, and to develop and implement a plan that is helping ensure her long-term success.

After graduating from the Rhode Island School of Design, Gail started a business, Ahlers Designs, making unique works of sculptural art and gifts from metal, glass, wood and recycled materials. But as an artist who lacked formal business training, Gail’s business journey was more adrift than direct.

“I think differently as an artist than someone who is trained in business and sells insurance,” Gail said. “My artistic skills were sound, but I lacked fundamental business skills and a focused plan to get me where I wanted to be as an artist and a businesswoman.”

All that changed in 2007 when Gail was introduced to the Women’s Business Enterprise National Council (WBENC), a national organization that trains, certifies and advocates on behalf of women-owned businesses.

For Gail, WBENC exemplifies her “sisterhood of prosperity” philosophy.

WBENC is the largest third-party certifier of businesses that are 51 percent or more women-owned, controlled and operated in the United States, and “the nation’s leading advocate of women-owned businesses as suppliers to America’s corporations.”

According to the WBENC website, the non-profit organization provides certified Women’s Business Enterprises, or WBEs, the training and tools needed “to help grow their ability to better operate their business, grow their capacity to meet corporate needs, and better understand how to compete in a diverse procurement environment.”

“I’ve learned something really useful at every event,” said Gail. “And being around women who share information is extremely helpful. I’ve developed lasting friendships with some really talented women who are willing to share their knowledge and experiences to help me succeed.”

Gail met Ricardo Barrientos, of PepsiCo, at a conference in Chicago in early 2012. Ricardo, who is responsible for PepsiCo’s supplier diversity programs, is a regular attendee at WBENC conferences and business fairs, which provide corporations an opportunity to network with women entrepreneurs.

WBENC and PepsiCo have a long history together. PepsiCo was a founding corporate member of WBENC in 1997, and has continued to support the organization and its regional partners across the United States.

“Gail approached me at the PepsiCo booth and said she was working on a special presentation for WBENC using recycled Pepsi cans,” said Ricardo. “She said she was doing the project as a gift to WBENC to show her appreciation for all it has done to help her grow and develop as an artist and businesswoman.

“Gail said her association with WBENC has been life-changing,” said Ricardo. “It helped define her niche in the marketplace, and provided her with the skills and confidence necessary to successfully promote her talents. I told Gail that PepsiCo would help promote her project once it was presented to WBENC.”

Gail presented her art sculpture, “Celebrating Women in Business,” to WBENC during a national conference in the spring of 2013. Later that year, WBENC commissioned Gail to create two sculptures that were presented to the co-founders of the Women’s Business Development Center in Chicago to thank them for 27 years of dedicated service to women entrepreneurs. (All of these sculptures used recycled Pepsi cans.)

“Gail’s art is an excellent example of the ‘out of the box’ innovation WBENC WBEs can provide to our constituent base,” said Candace Waterman, chief of staff of WBENC Certification and Program Operations.

“Gail’s 360 approach and creativity produced a piece that is representative of the relationship between PepsiCo, WBDC-Chicago and WBENC. I was more than honored to present it to the WBDC-Chicago co-founders,” she said.

This site uses Akismet to reduce spam. Learn how your comment data is processed.